Copyright © 2006, 2009, 2010 by David Jungblut.  All rights reserved. No part of this publication may be reproduced or distributed in any form or by any means, or stored in the database or retrieval system, without prior written permission of David Jungblut, Ocean City, New Jersey.

Why Did the New Orleans Levees Fail?

The thesis advanced in this article will show recently-uncovered evidence indicating that downburst energy, in the form of microbursts, generated straight-line winds and could have been part of the mechanisms resulting in the failure of the New Orleans levees during Hurricane Katrina.

Why did the New Orleans-area levees fail?  This is one question left unanswered, even after an extensive review by the federal government was published in “Technical Note 1476: Performance of Physical Structures in Hurricane Katrina and Hurricane Rita: A Reconnaissance Report”, by the National Institute of Standards and Technology (NIST).  The NIST report stated: “The mechanisms should be fully investigated using rigorous models and experimental analysis before firm conclusions can be drawn.”  I suggest that the models will be inconclusive unless microburst and straight-line energy are taken into account in the models with the equivalent level amount of energy level that my study indicates.  Microburst (a downburst that is smaller than 4 Km in size) and straight-line energy were part of Hurricane Katrina’s assault on Mississippi, and the following evidence will show that microburst and straight-line energy were part of the storm that hit New Orleans and surrounding areas, as well, and a possible factor in the destruction of the levees.

The following map shows the location of a series of photographs that depict storm damage in the New Orleans-area.

The following series of photographs that depict storm damage in the New Orleans-area, with annotations presented following each photograph: 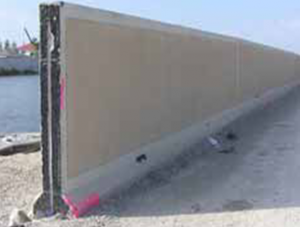 The 17th Street Outfall Canal carries discharged water from Jefferson Parish and New Orleans Parish to Lake Pontchartrain. The concrete levee system was beached at N30 00.972 latitude W90 07.239 longitude; this beach caused extensive flooding of New Orleans Parish.  The flood protection wall in this photograph looks to be unaffected and shows no signs of stress due to the hurricane, but the next section is missing.

Can water alone place stress on one section of levee and the adjoining section unaffected?  Water alone cannot do that, however, wind can cause just this effect in the form of straight-line winds from microbursts.  The jet-like currents of air can impact a discrete area and leave nearby areas unaffected.  Searching National Oceanic and Atmospheric Administration’s (NOAA) Hurricane Katrina images at noaa.gov, one can locate evidence that microbursts and associated straight-line winds were active during Hurricane Katrina as shown in the next photograph near the breach at Jourdan Road. 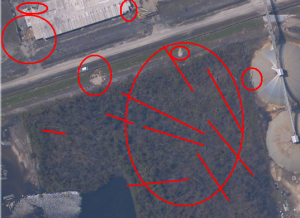 Photograph 2:   View of a microburst area on Jourdan Road between Morrison and Dwyer Road near the Inner Harbor Navigation Canal (Credits: NOAA Image 24425508 and analysis by David Jungblut)

The large red circle painted on the NOAA image, shows a microburst (a downburst that is smaller than 4km).  The red lines show the star-burst pattern in which the trees fell; this indicates that multiple wind directions were present during Hurricane Katrina.   The small circle lines indicated damage to the surrounding buildings, along with possible ground damage to the road embankment on Jourdan Road.   A close up of the area shows the trees falling in multiple directions. 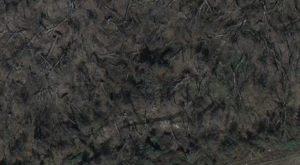 Photograph 3:   A close up of the microburst area on Jourdan Road between Morrison and Dwyer Road near the Inner Harbor Navigation Canal (Credits: Google-Imagery and U.S. Geological Survey, map data)

The next photographs (#4 to #6) were taken between the breach that occurred at 17th Street Outfall Canal (See Photograph 1) and Lake Pontchartrain. 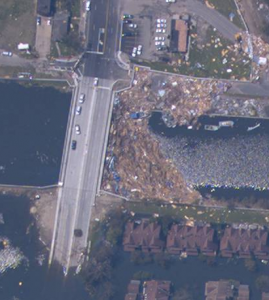 Closer inspection reveals that some buildings in the area did suffer damage from strong winds, as seen the Photograph 5.

The next photograph shows that the breach at 17th Street Outfall Canal and the surrounding neighborhood experienced wind damage.

Photograph 6 shows the heavy flooding flowing into New Orleans Parish at the breach.  Some of the buildings just north of the breach show roof damage that can be attributed to strong winds.

Further south near one of the two breaches at London Avenue, two other buildings were “blown apart” with debris scattered in three directions, as if a small microburst hit them.  See Photographs 6 and 7. 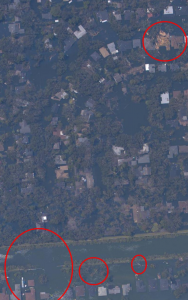 Photograph 7 and 8(Credits: NOAA Image and analysis by David Jungblut)

In photograph 7, the large circle shows the breach at London Avenue and the upper right circle shows the house that experienced a microburst.  Photograph 8 shows another house that was hit by microburst energy, demonstrating that high winds were active in the area during Hurricane Katrina.  Applying the Fujita Tornado Damage Scale (with the appointed damage as a guide), we can estimate the wind speed at 207 to 260 miles per hour.   The Fujita Tornado Damage Scale is provided at the end of this document.

It is legitimate to query:  If these houses experienced downburst winds could these same winds have impacted the levee system? The following warning was indeed issued on the day Hurricane Katrina approached.

THE NATIONAL WEATHER SERVICE IN NEW ORLEANS HAS ISSUED A

* TORNADO WARNING FOR CATASTROPHIC WINDS FOR…

THIS INCLUDES THE CITIES OF…TIMBERLANE…METAIRIE…MARRERO…

THIS INCLUDES THE CITY OF CUT OFF

THIS INCLUDES THE CITY OF NEW ORLEANS

THIS INCLUDES THE CITY OF CHALMETTE

* AT 832 AM CDT…MANY REPORTS ARE COMING IN STATING TOTAL

SEEK SUBSTANTIAL COVER NOW!!! THIS IS A LIFE-THREATENING SITUATION.

Coinciding with these catastrophic wind warnings, three of the nine levees failed at about 9am.  The others followed within the next 24 hours.  The words in the warning seem to indicate the winds could have caused “STRUCTURAL FAILURE IN THE NEW ORLEANS METRO AREA” affecting all the levees during the “8:32 AM CDT” reporting window or immediately after.

Developed in 1971 by T. Theodore Fujita of the University of Chicago

During the summer of 2005, David Jungblut spent time in New Orleans as Hurricane Katrina approached and later did a scientific investigation into the damage that the hurricane inflicted because homeowners’ insurance claims were being rejected. Insurance companies claimed that all damage was due to flooding and not wind.  David Jungblut pointed out that wind damage was visible.  He wrote reports about his findings, all pro bono.  Later he posted his findings at http://www.hurricanekatrinastudy.com/  that was available to homeowners, engineers and lawyers free of charge.

David Jungblut has a degree in Geology from Livingston College, Rutgers University.  He worked for the United States Geological Survey focusing on stream flow hydrology for three years.  David has done environmental consulting for radon and environmental sensitive land development in New Jersey.  He spent time working in water and sewer treatment plants.  For the past 21 years, he has taught science at Oakcrest High School in Mays Landing, New Jersey.

Confidentiality – Avis de confidentialite
The information transmitted is intended only for the addressee and may contain confidential and/or proprietary material. Any unauthorized review, distribution or other use of this information, or the taking of any action in reliance upon this information, is prohibited. If you received this in error, please contact the sender and delete or destroy this message and any copies.